Expended automotive parts are transformed into sculptures; old mechanic rags are quilted into homely wall-hangings or assembled into lounge chairs; mechanic gloves are suspended by chains and dowsed in motor oil that leaks onto the gallery floor. Raised by a long line of automotive mechanics in Metro Detroit, Dominic Palarchio has been immersed in the working-class culture that his art and practice best epitomizes. Without consideration, the work may appear simplistic and the materials over familiar. However, Palarchio’s works are best interpreted as an amalgam of forgotten materials discarded by the automotive trade as well as commenting on the omnipresent environmental concerns of the American industrialized Midwest.

His visual language is often idiosyncratic: impenetrable at first for viewers removed from automotive labor and the machine, yet more friendly and inviting to those who may have had to finagle a repair on the side of the road. Nonetheless, the knowledge of the automobile is not a primary concern for the viewer in understanding the intention of Palarchio’s work. Rather, the intellectual activity involved simply requests viewers to ask timely questions regarding the environment and the impact the automotive industry has on it. Yet, at the same time, Palarchio creates a conversation that not only sheds light on, but is also more sympathetic to, the effects of capital and competition on those negatively impacted by this distinctive industry.

The sculptural work, 2001S10 Catalyst (2019), resembles something out of the Arte Povera (poor-art) movement or a neo-Dada ready-made object. The work consists of a common poly-bag filled with precious metals and situated atop of an industrial pedestal crafted from purported cast-off steel welded together. The metals in the poly-bag are fragments of a catalytic converter composed of platinum, palladium, and rhodium. 2001S10 Catalyst examines the process of shop workers who maneuver around standard markets and regulations, while also raising important questions regarding the legality and malpractice of independent mechanics trying to sell their service at any cost. 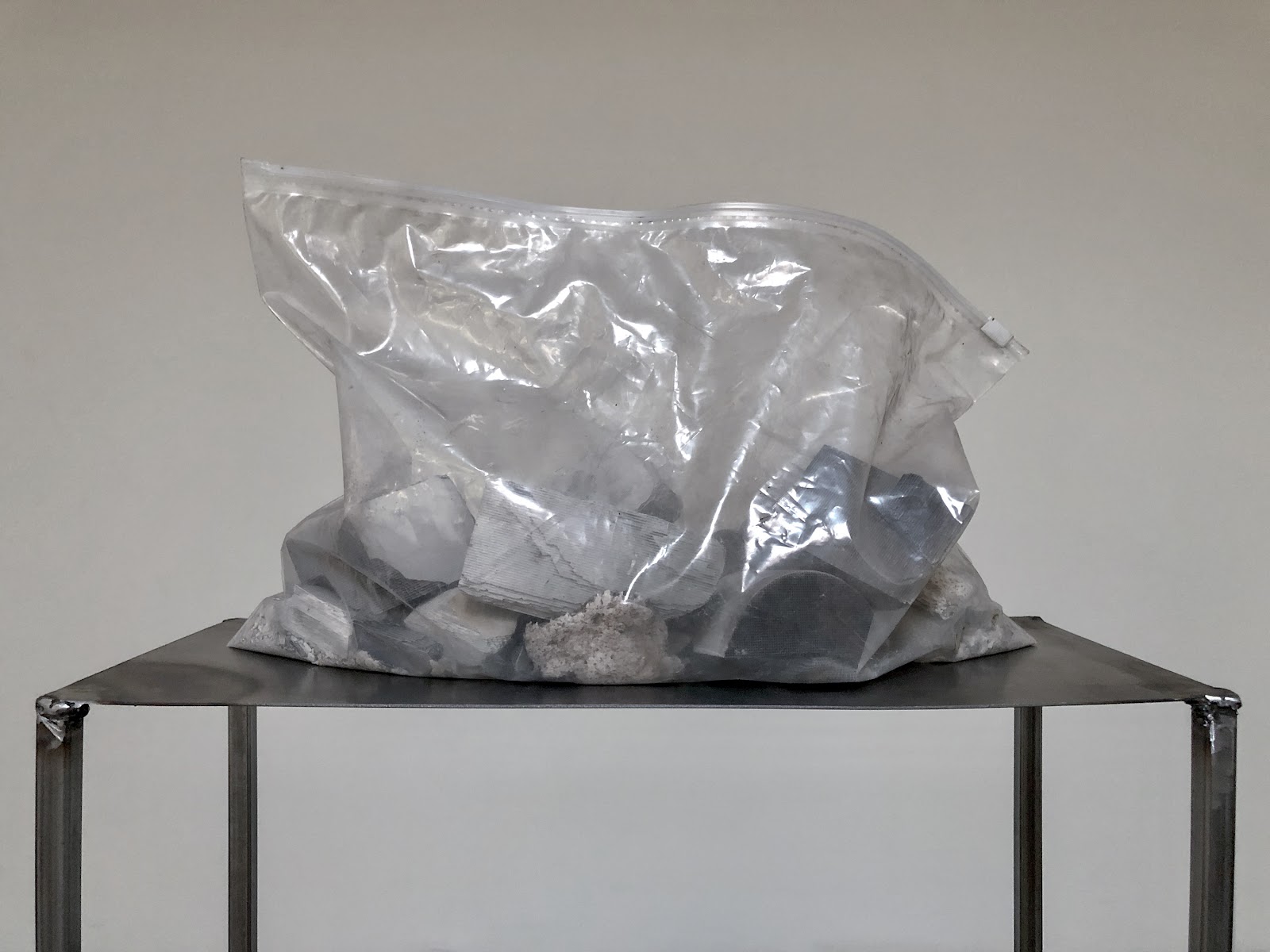 The catalytic converter was invented as a response to the invisible chemical pollution and the excessive smog buildup in the atmosphere that first came to public attention in the 1960’s. The purpose of the technology is to convert toxic gasses by catalyzing a redox reaction. A redox is a sped up oxidation process through a non-depleting metal that adds and removes nitrogen and oxygen atoms to make automotive exhaust less toxic to the environment. However, 17 states and most of Canada’s provinces have no emission test standards—practically leaving no way of ever being caught for driving without a catalytic converter. The poly-bag not only serves as a “protective” barrier between the viewer and the precious metals, but also indicates a highly questionable market exchange.

Palarchio explains in an essay accompanying the work that, “in today's market, a [catalytic converter] will resell via the mechanic around $60 from a scrap metal recycler.” For working people, virtually required to own a car in the Detroit area, the repair for a catalytic converter is likely out of budget. As Palarchio states, “some independent mechanics might propose a ‘cleaning’ as a much cheaper option to customers in need. The catalyst’s honeycomb structure inside cannot be cleaned, but it can be removed by a crafty serviceman.” In a typical “cleaning,” the mechanic will slyly remove the catalytic converter. After being charged the service fee, the driver resumes their life as toxic levels of exhaust emit into the atmosphere. The work itself also calls attention to the financial struggle for many working-class Americans and the high cost of auto-service maintenance, in addition to the environmentally hazardous decisions made by some mechanics in order to guarantee a transaction. 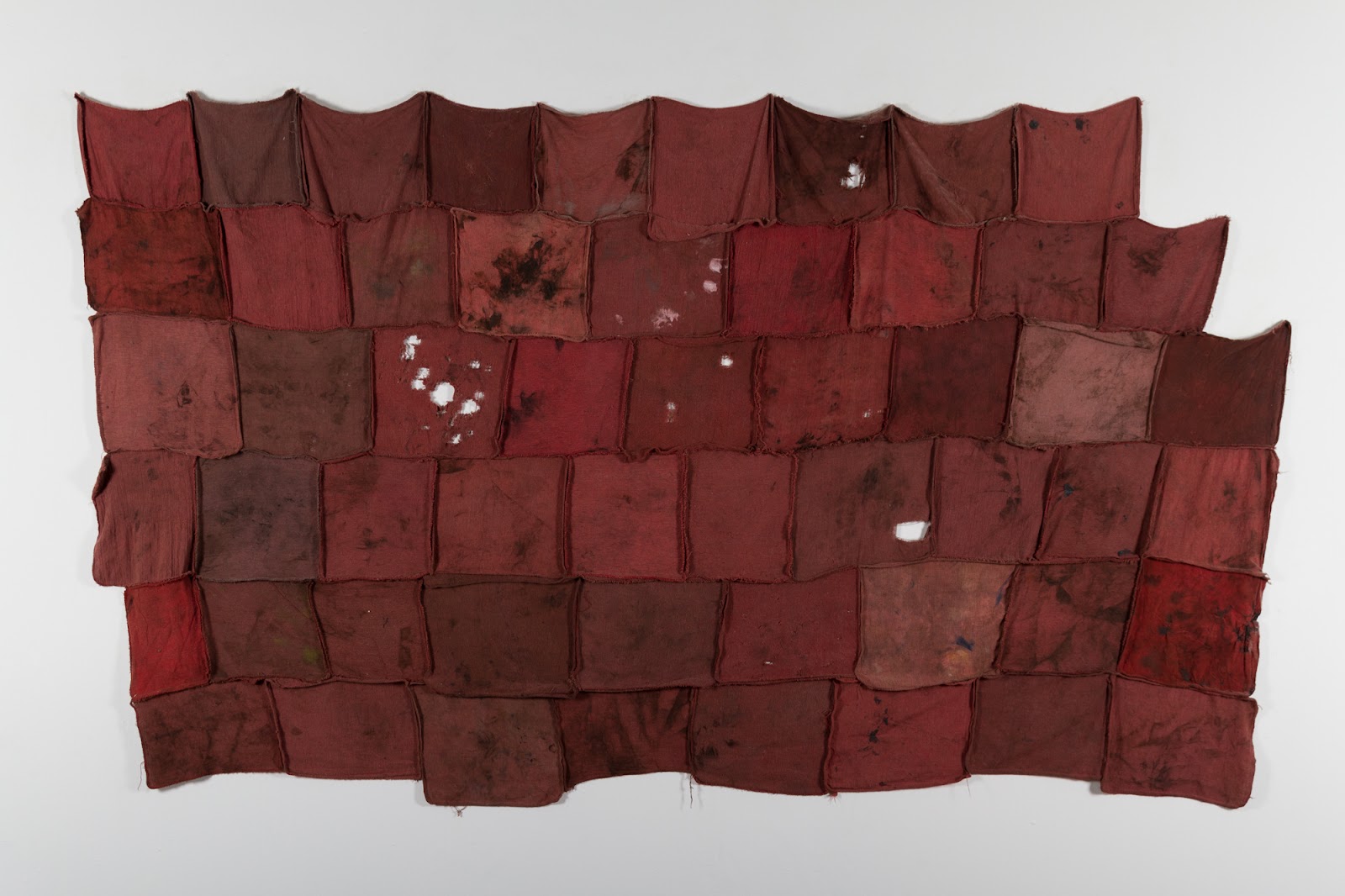 Palarchio’s (2018), a tapestry of shop rags stained with oil and grime, speaks to the artist’s immense love and respect for his family’s lineage and their line of work. His father is a mechanic who owns and operates an auto-service shop on the outskirts of Metro Detroit. The shop rags that have been quilted together were supplied directly from Palarchio’s Auto Service, a place that, as a child, the artist referred to as “daycare.” The rags function as relics of the labor that has provided for him. Aesthetically, the wall-hanging recalls mid-century drip and splash paintings, most notably from the New York School. Similarly, Palarchio's (2019) is crafted and assembled from the same shop rags—this time forming a lounge chair typical of suburban Detroit backyards and lake-side waterfronts. The work signifies the “after work” ritual of cracking open a beer, an initiator for relaxation and unwinding following intensive labor typical of an auto-mechanic.

When investigating these works up close, it is easy to imagine how the oil and grease dripped and splattered; how the grime embedded itself; how the hands of the worker ripped and tore; how the smell radiates off of the fabric and evokes the odor of a mechanic returning home from a day’s work; or even the soft touch of the cloth and how it recalls the sentimental comfort of the family. Most importantly, these works consider the physical impact of labor conditions on working bodies, as well as how the accessories of their labor spill into their time off, both figuratively and literally.

Forfeit (2018) is a hanging sculpture that demonstrates a considerable amount of gravity and verticality in its effect. The weight of the work is both visceral as well as literal. Each chain in the strand represents a vehicle that was at one time a vital machine for the commute to and from work. Because of Detroit’s salient lack of public transportation, the automobile serves as a lifeline between making it to the workplace or not. Granted, there are public city buses— however, both buses and cars share the mechanical foundation of the automobile and both are inescapable from the need for repairs, part replacements, and even the eventual scrapping of the vehicles. 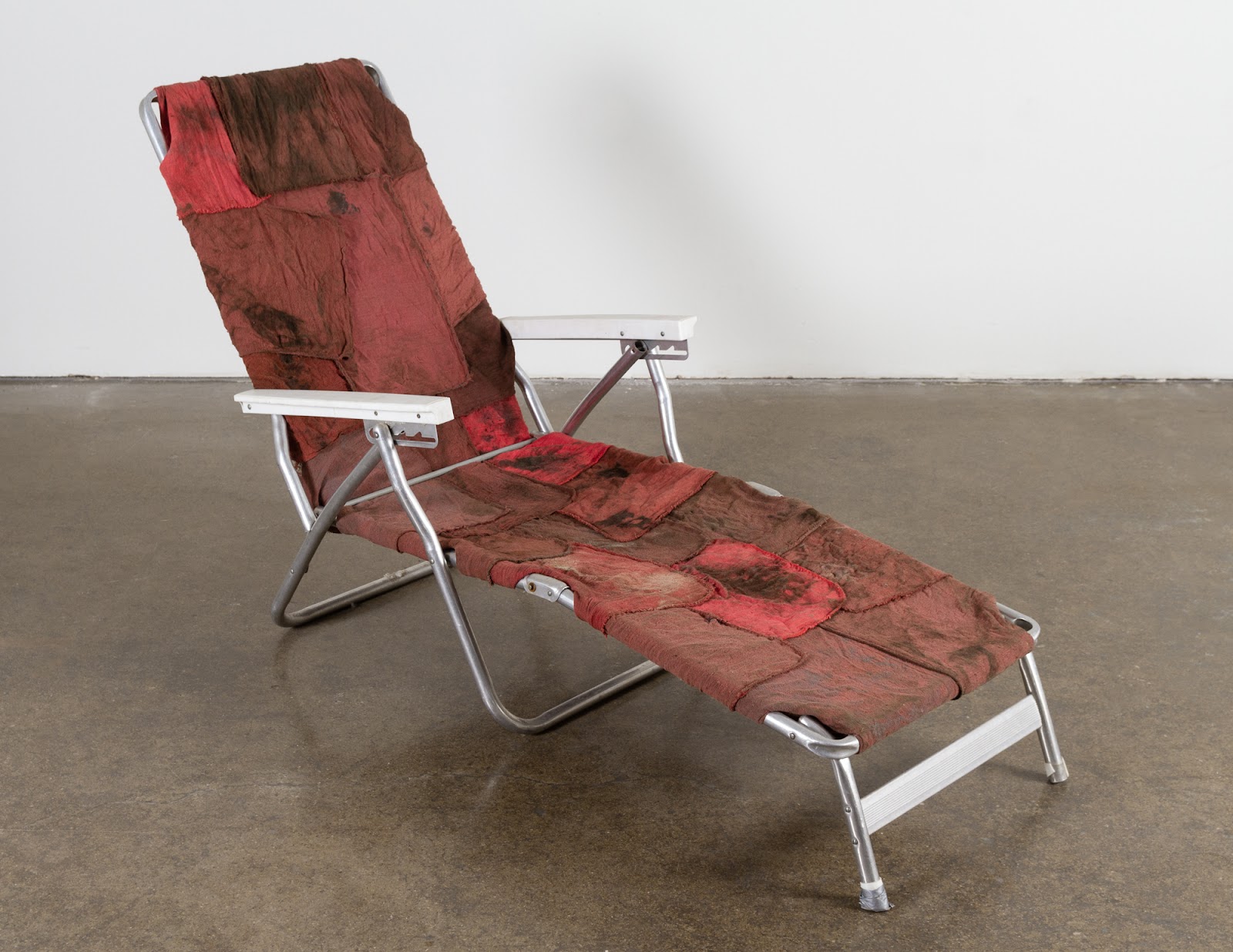 Personalized or plain, a set of keys denotes a specific ownership and fortunate access to the physical, private property of an automobile. Accidentally losing a key can be a nightmare. Moreover, many poor and working-class people surviving on “check-to-check” income have to forfeit their keys when they can’t afford to repair their vehicle. Often times, the functional value hardly exceeds the repair cost—if at all. Countless cars are then scrapped, or worse, left to rot in their place of surrender. Forfeit thus serves as a memento-mori of the autonomy that comes with vehicle ownership. 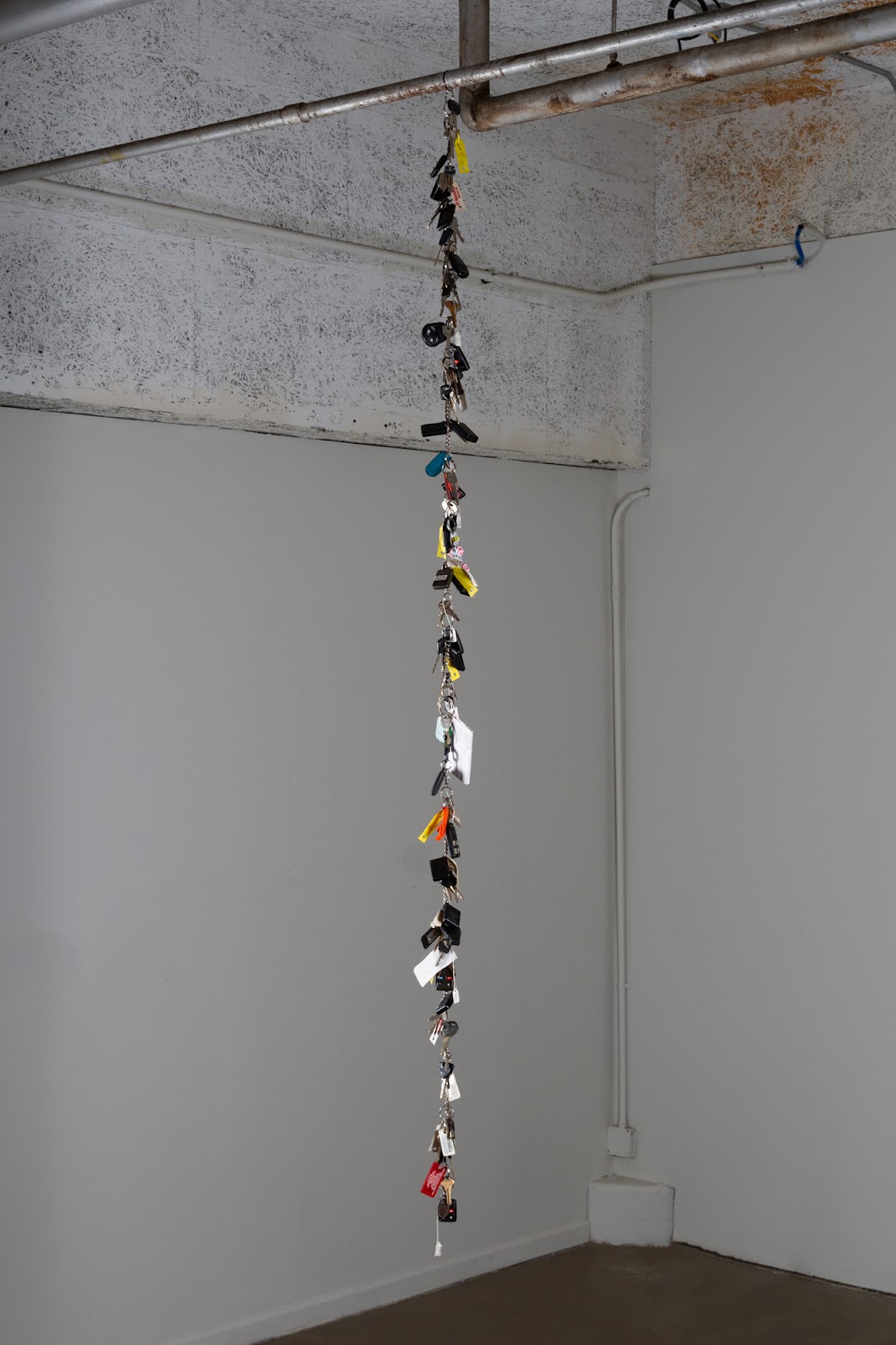 Palarchio’s work is successful in its intent because it forces the viewer to reconcile with the automotive industry as well as the social and environmental consequences that proceed from it. By provoking affect and introducing topical discourse on working-class livelihood in the gallery space, Palarchio seeks to make visible the minimal opportunities for upward mobility in the social margins—especially how class mobility and transportation are intertwined with capital. The ways in which the industry and everyday people are interdependent, yet constantly on the brink of losing their “wheels,” often give way to second-rate solutions that are employed within the current economic system. Palarchio’s work thus offers a valuable lesson into the often unseen impact of the auto-service industry in Detroit, as well as the rest of the world. 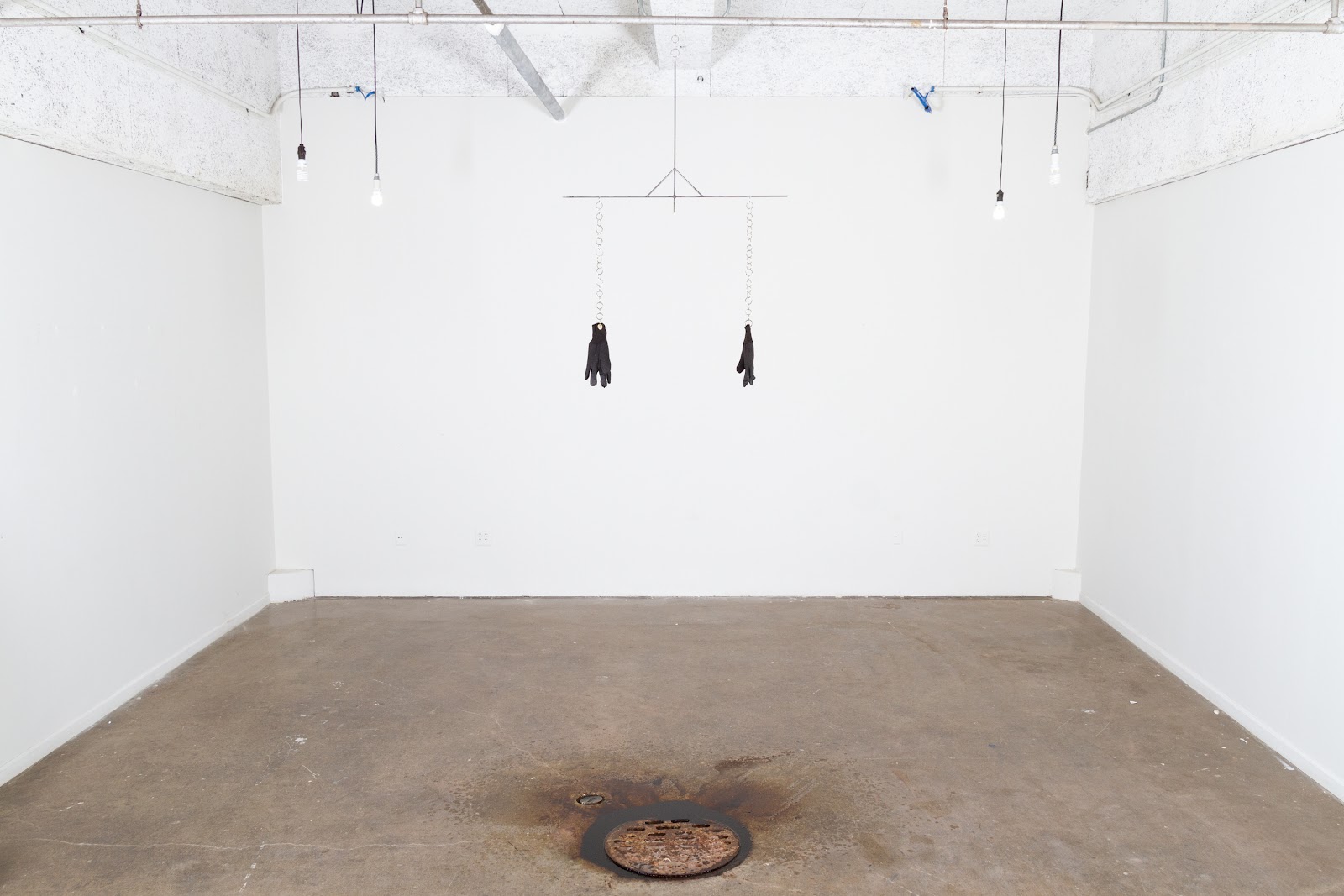